In my last post about the Nathan Quickdraw Plus, I mentioned that I started searching again for higher capacity hydration pack since I decided to take on longer distances already. This decision was actually motivated by my plan to join the 21K category of the Adidas King of the Road Race 2010 on October 24.

Besides handheld hydration bottles, the next kits I saw were the hydration belts. I thought before that these belts were overkill since I was only running 5K and 10K races. On the other hand, now that I am moving to the 15K marker and beyond, I have started looking into these belts again.

I was able to found 2 of the popular hydration belts locally. These are the Speed 4R from Nathan and the Helium 4-Bottle Belt from Fuel Belt. Unfortunately, these two belts did not appeal to my form and function standards. Don't get me wrong, these belts get the job done but I just don't find the "it" factor in these belts. 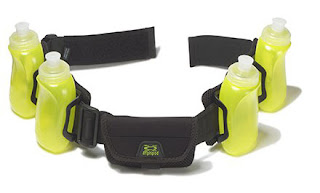 Luckily I was able to find a local seller of the Amphipod. Here's his Multiply account for those who are also looking for one. What I bought was the Run Lite 4, the one pictured above. I already made sure that I have enough even up to when I decide to run my first marathon.


What endeared me to the Amphipod is the simplicity of its design via the quick-click access to the bottles and the versatility of the bottle locations depending on your needs and/or preferences.

I have used my Amphipod once in a 15K race and 3 times during training and I am all thumbs up for this product. Comfort and usability are all top-notched. The bottles themselves are all well-made and leak-free since my current configuration is the bottles are placed horizontally along the belt.

I do have some words of caution though which I listed below.

1. Make sure that you hear a click when you snap the bottle back to its holder. I read several stories in the Web that, for whatever reasons, they were not able to put the bottle back properly, the bottle popped off from its holder and got lost. With this in mind, I normally get my bottle during my walk breaks. I tried getting and or returning the bottle while I was running and it was a bit more challenging and admittedly more prone to error.

2.  Make sure that the cap of the bottle is fully closed when you return it to its holder. This is most applicable if your bottles are placed horizontally along the belt. When the cap is not properly closed, the liquid inside the bottle will leak when you run. Of course, this is not a design problem for the bottle but rather a user problem.
Posted by Din Cordero at Monday, August 23, 2010